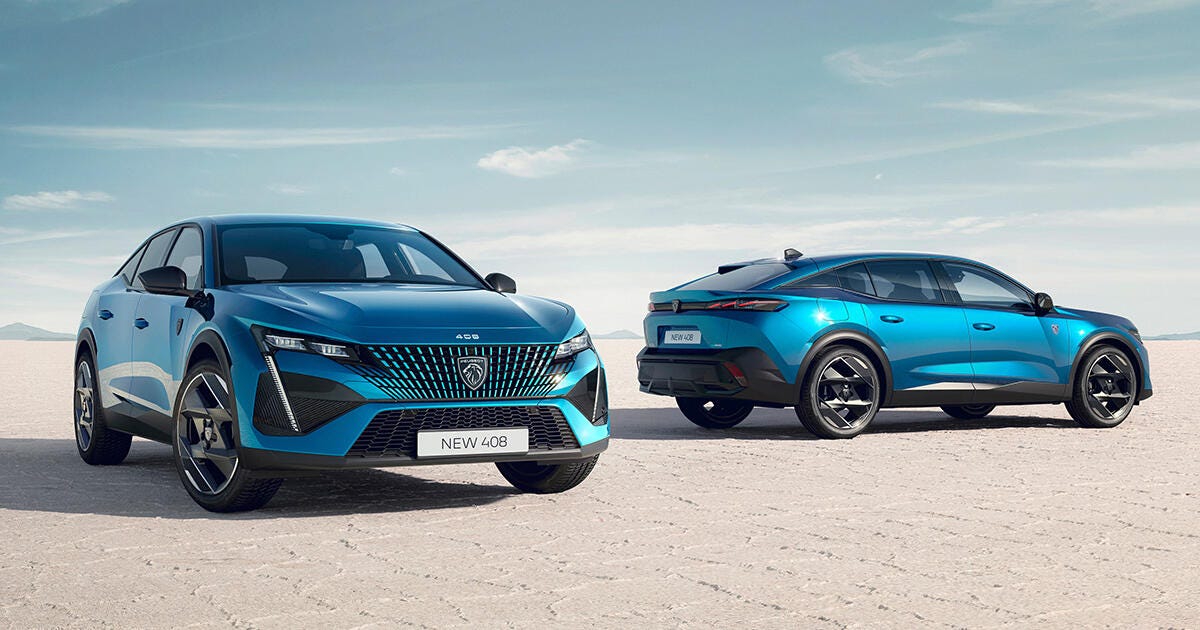 I’ve always had a fascination with French cars. I can’t remember what model first struck me, but from a young age my favorite car has always been the groundbreaking Citroën DS, and French production and concept cars usually fill my personal yearly lists of the best new car designs. French cars are consistently weird, confusing and wonderful, with the perfect mix of beauty, functionality and innovation. On Wednesday, Peugeot unveiled its new 408, a genre-bending crossover twin of the Citroën C5 X that embodies everything I love about French car design.

The 408’s overall silhouette is that of a four-door coupe or sleek fastback sedan, but it has the raised ride height and wide stance of an SUV. It’s kind of like the old AMC Eagle or the Honda Accord Crosstour, both of which were ahead of their time, but the 408 is far better looking than either. The 408 is about 3 inches longer than the similarly shaped Polestar 2 and has a 2-inch-longer wheelbase, and the Peugeot is pretty much identical in height. The low hood, rising shoulder line and raked rear glass give the 408 an athletic, “feline” stance that’s appealing from every angle.

Peugeot gave the 408 the coolest version of the brand’s new face yet. Its grille is made up of dozens of thin, body-color pieces that get larger the further they are from the center emblem, flanked by slim matrix LED headlights that feature Peugeot’s signature fang-like lights spearing down into the lower gloss-black intakes. Similarly, the rear end has the brand’s three-claw taillights set into a black bar, like on other models, but the 408’s lower cladding and integrated ducktail spoiler set it apart.

Beyond what you notice at first glance, the 408’s design is full of fascinating details and surfacing. The front door and rear shoulder each have three character lines that come to a point, which catch the light and your eye in a wonderful way and flow down into the angular, upswept rocker panel. The black plastic wheel arches have a nice lip to them, and the bodywork that surrounds said arches is pinched in near the top to visually enhance the car’s width. Cleverly hiding the hinges for the hatch are two ‘cat ears’ integrated into the spoiler that Peugeot says improve aerodynamics. Check out those Ferrari-like fender shields, too!

Last month I said the updated Rolls-Royce Phantom has the best wheels on sale, but the 408 has absolutely upstaged them with its wheels. The 20-inch kinda-four-spoke wheels have what Peugeot describes as a “disruptive” design. They look like a sci-fi ninja’s throwing stars and are unlike anything I’ve seen on a production car. Other wheels are available, with sizes starting at 17 inches, but I don’t know why you’d choose anything else. The car in these photos is also painted in Obsession Blue, a new color developed for the 408.

The 408’s angular interior is super funky too, with the same i-Cockpit theme as other Peugeot models. A 10-inch central touchscreen is angled toward the driver, while the 10-inch digital gauge cluster is positioned closer to eye level. The 408’s air vents are also mounted high up, which Peugeot says improves comfort, and the compact steering wheel has redesigned controls.

Everything is oriented for ease of use while driving, but the center console is open so the passenger can use the screen. Available features include massaging seats, a Focal sound system, night vision, a panoramic sunroof and all sorts of driver-assist tech that uses six cameras and nine radar sensors, like adaptive cruise control with semi-automatic lane changes.

The least interesting part about the 408 is its powertrains. The standard offering is a turbocharged, 1.2-liter, three-cylinder gas engine with 130 horsepower, but two different plug-in-hybrid setups using a 1.6-liter four-cylinder are available. Every powertrain uses an eight-speed automatic transmission and front-wheel drive, and both hybrid have a 12.4-kilowatt-hour battery pack. The most powerful setup has 225 hp, but no range figure is given. A fully electric e-408 is coming next year, which should be the pick of the litter.

The new 408 will go on sale in Europe at the beginning of 2023 before expanding to other global regions. It will be built both in France and in China, with the Chinese version getting the name 408 X due to the already existing (and much more boring) 408 sedan in that country. Sadly there’s no chance the 408 will be sold in the US, as Peugeot’s plans to reenter the country were shelved by Stellantis a few years ago. Merde.