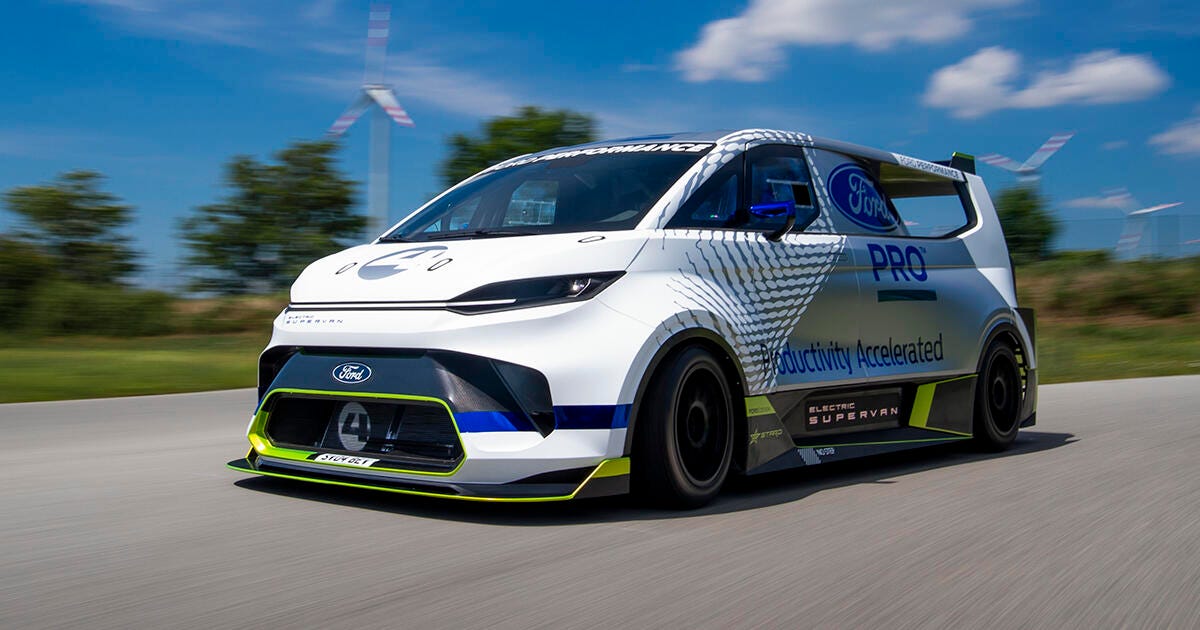 When Ford’s engineers get to let loose on an unregulated project, things happen. In 1971 Ford unveiled the SuperVan, which blended the chassis and midmounted 400-horsepower V8 engine with the body of a first-generation Transit van, resulting in silly looks and a top speed of 150 mph. It was followed in 1984 by the SuperVan 2, which had a more custom fiberglass body based on the Mark 2 Transit face-lift placed on top of the monocoque and 582-hp V8 from the Cosworth C100 — it hit 174 mph. Then there was the SuperVan 3 in 1994, featuring the looks of the second-gen Transit (called the Mark 3) and an absurd 641-hp Cosworth V8 shared with Formula 1 cars.

All three SuperVans have been paraded around the UK and other countries as excellent promotional tools for the Ford brand and its racing partners, but despite two more generations of Transit van coming out since then, there hasn’t been another SuperVan. Well, at least not until now, as the brand unveiled the new Ford Pro Electric SuperVan at the Goodwood Festival of Speed this week, and it’s the craziest SuperVan yet.

As you might expect from its name, the new SuperVan has a fully electric powertrain and is loosely based on the recently unveiled E-Transit Custom, making this the first SuperVan to be based on one of Ford’s smaller van offerings. The SuperVan has a 50-kilowatt-hour battery pack and four electric motors, giving it all-wheel drive and 1,973 horsepower. That’s more than triple what the SuperVan 3 made, and it’s almost 400 hp more than a Bugatti Chiron Super Sport. Ford says the SuperVan can hit 60 mph in under 2 seconds, and the battery can be fully recharged in 45 minutes.

The new SuperVan uses the floorplan from the production E-Transit Custom combined with a custom steel spaceframe and composite body panels. It uses a double wishbone suspension setup at all four corners, and the SuperVan has racing-spec subframes and brakes. There are five selectable drive modes — Drag, Drift, Rally, Road and Track — and the regenerative brakes have three different adjustable settings. The SuperVan even has a “tire cleaning mode” that engages the brakes on one axle while spinning the other, resulting in a huge burnout that helps to clean and warm up the tires.

But maybe even crazier than the SuperVan’s performance is how it looks. While it is recognizable as a van, kind of, the SuperVan has superwide fenders, huge air intakes, an intense rear spoiler and diffuser, new wheels fitted with racing slicks and angular headlights connected by a lightbar. The most striking design element is the rear dorsal fin, which is created by what would be the side window panels flowing inward, creating a V shape where the bodywork meets the rear wing. But the rearmost pillar remains intact, which gives the SuperVan the most absurd flying buttress effect I’ve ever seen, reminiscent of what’s on the Ford GT hypercar.

The interior is almost entirely stripped out, with a roll cage filling the whole cabin, FIA-spec bucket seats, a large e-brake handle for easy drifting and a complex steering wheel. But the SuperVan has the same large vertical touchscreen as the Mustang Mach-E, which in addition to performing regular infotainment functions can control the SuperVan’s powertrain and other performance features. It can also instantly send real-time telemetry data to team members in the pits, similar to how fleet managers can monitor their production vans. Best of all, the SuperVan still has cargo space behind the driver accessed through a side door with an electromagnetic release.

Ford debuted the SuperVan at the Goodwood Festival of Speed (check out the video above, it’s wild). The SuperVan is being driven throughout the weekend by Romain Dumas, who in addition to setting records at Goodwood and Pikes Peak has won the 24 Hours of Nürburgring four times, competed in the 24 Hours of Le Mans and even won a class victory at the Monte Carlo rally. Here’s hoping that Ford will continue to showcase the SuperVan at events and on tracks for years to come.