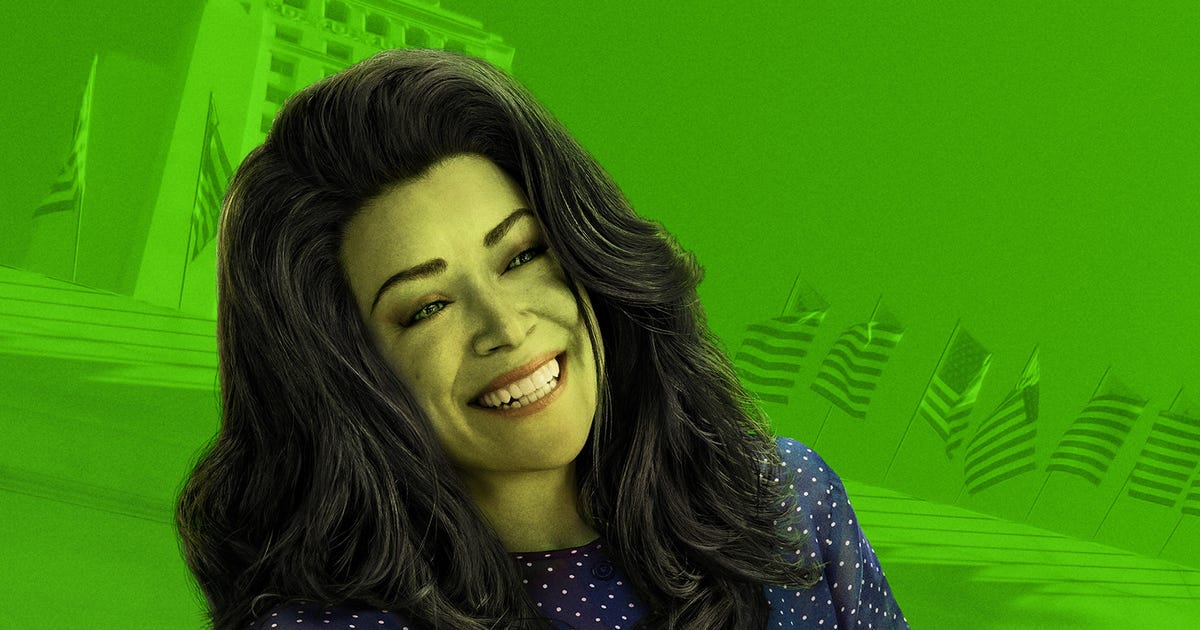 Dearly beloved, we are gathered her to celebrate She-Hulk (and Titania) crashing a wedding in episode 6 of She-Hulk: Attorney at Law, streaming on Disney Plus now.

Here are our recaps of She-Hulk episode 1, episode 2, episode 3, episode 4 and episode 5. Now it’s time for a look into the latest installment, titled “Just Jen”. This is a quiet week for cameos and Easter eggs, but look out for spoilers!

The next outing is Episode 7, which drops on Sept. 29 with more arriving every Thursday (here’s the full schedule of episode release dates for She-Hulk).

The episode opens with another fourth wall break that points out the most annoying thing about the show like that absolves the issue. Episode 5 ended on a cliffhanger promising the return of Daredevil, and then episode 6 turns out to be a self-contained wedding episode at an inconvenient time in the season. But OK, we’ll go with it. Who doesn’t love a wedding?

Jen, it seems. Or at least, as with most things, she’s deeply ambivalent. She was hoping to dazzle all her old friends with how she’s killing it at work, plus has great hair and actual superpowers. But “Shulky” is banned from the wedding so as not to upstage the bride (an old school friend who has never been mentioned before now). And old friend Lulu isn’t interested in any of these varied successful aspects of Jen’s life, instead commiserating that Jen doesn’t have a man in her life.

Which may change, if Josh turns out to be an actual decent guy and not some secret bad guy getting inside Shulky’s defences. Meeting Josh hopefully makes up for facing Titania again in a dancefloor confrontation that ends with Titania slipping on ice and smashing her teeth. Hilarious stuff.

Meanwhile back at the office, the B story involves Mallory and Nikki working a divorce case for one Craig Hollis, a comic character with the power of resurrection thanks to being the next stage of human evolution. Although in the show he’s just a douchebag — Mr Immortal should be called Mr Avoidant, as he would rather literally die than acknowledge another person’s emotions.

Mr Immortal is convinced he’s a nice guy, even though he refuses to ever work out problems and instead devastates a series of spouses and families. This is another example of using superpowers to amplify and highlight real human fears, flaws and failings.

It does also suggest that superpowers are pretty common in the Marvel Cinematic Universe, and not everybody gifted with extraordinary abilities ends up an Avenger. With great responsibility comes great assholery, apparently.

The case leads Mallory and Nikki to Intelligencia, a “website for hateful manbabies” that posts 24 hour driving videos and recreations of famous artwork. But looking closer they discover forums hating on She-Hulk, from memes to actual death threats.

Again, no post-credits scene this week. But the final scene hints at a forthcoming showdown: after the wrecking crew failed to get their hands on some of Jen’s blood because their hypodermic couldn’t pierce her skin, we see some nefarious lab technicians preparing a bigger needle — much bigger.