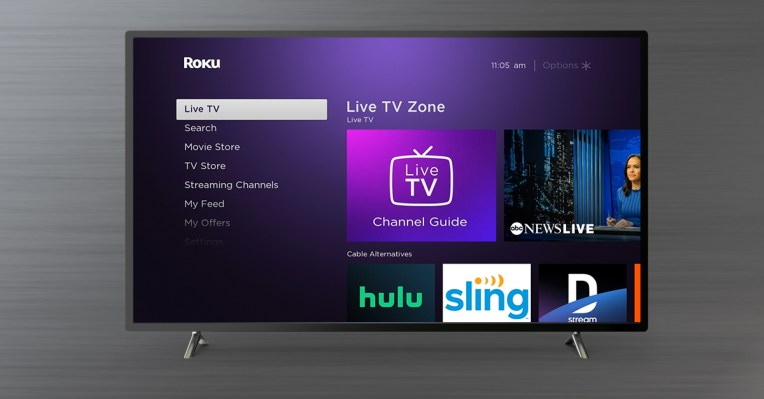 Roku is furthering its investment in its Live TV platform with today’s introduction of a new “Live TV Zone” that will roll out to the main, left-side navigation on Roku devices. The addition is designed to promote and highlight Roku’s livestreaming options, which include its rapidly growing live TV channel guide, now offering free access to over 200 live channels featuring news, weather, kids’ content, sports, movies, tv shows, Spanish-language programming and more.

The company first launched its live TV channel guide in 2020 as part of its broader free streaming hub, The Roku Channel, where Roku owners can also stream ad-supported TV shows and movies. At the time, the guide had provided access to over 100 channels from a branded, purple tile that appeared within The Roku Channel. When launched, users could browse through 12 hours of programming information. The experience, which is similar to how pay-TV viewers can browse what’s now airing in their own provider’s guide, helps to make the transition to Roku easier for cord-cutters who are used to turning on their TV and accessing live content. However, it also serves as a way to stream shows, movies, news and more without a paid streaming subscription — an option that may appeal to those looking to save money through cord-cutting.

With the live TV service, Roku positioned itself as more of a direct challenger to other free streamers, like ViacomCBS-owned Pluto TV and Comcast’s XUMO. The former, which reached $1 billion in annual revenue last year — about a year ahead of schedule — is an indication of the sizable revenue available in this market. Plus, the rollout of livestreaming has enabled media software maker Plex to grow its business and further fund its mission of becoming a one-stop shop for consumers’ media needs.

Roku, meanwhile, generates the majority of its revenue through its platform, not device sales. In other words, largely through advertising inserted inside its free content and content distribution. That’s also the part of the business that’s currently growing.

The company noted, too, that its recent streaming survey found that 61% of users without traditional pay TV still watch live news at least multiple times a week. So this update will play into that demand by making live news easier to access.

To get to the new Live TV Zone, you can either scroll down on the left-hand navigation to the “Live TV” option or do a search for “Live TV Zone” from the device. The feature is rolling out starting today.