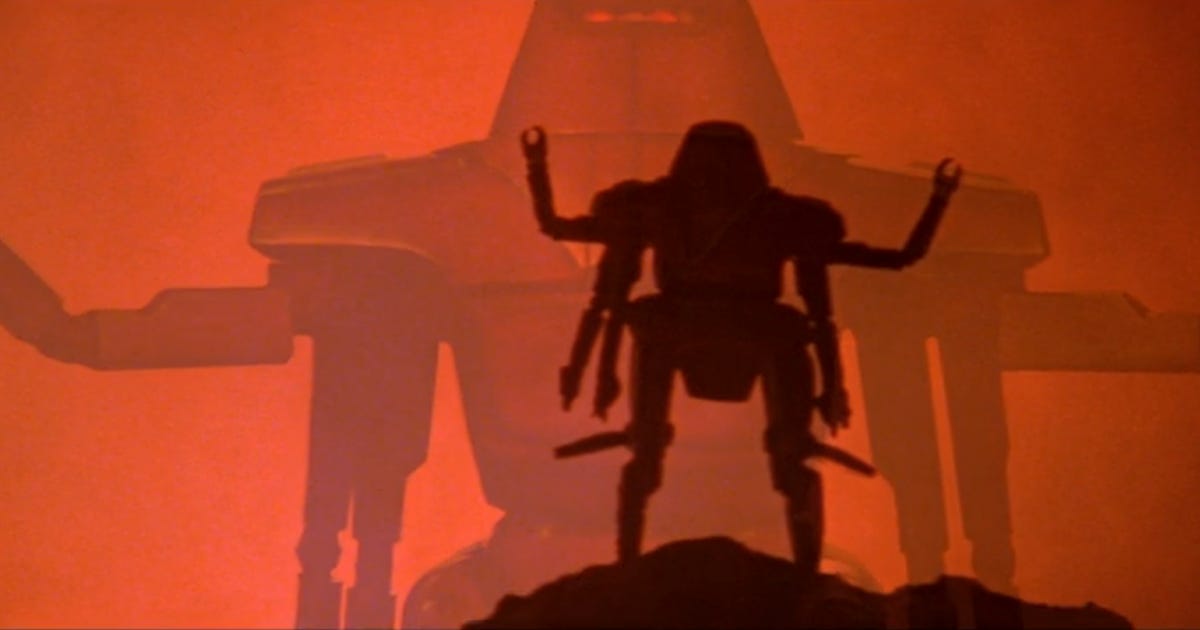 For a family-friendly streaming service full of classic kids films, Disney Plus hides some seriously traumatic memories: Bambi’s mother. The end of Toy Story 3. Everything about that awful Home Alone reboot.

But for my money, the scariest film on Disney Plus is… The Black Hole.

This 1979 chiller was one of many sci-fi movies Hollywood rushed into production to capitalize on the popularity of Star Wars (now also part of Disney’s catalog, ironically). Films like Battle Beyond the Stars and The Last Starfighter or TV shows like Buck Rogers and Battlestar Galactica were squarely aimed at kids. But while Disney made sure The Black Hole boasted cute droids and a few laser gun shootouts, it’ll remind you less of clean-cut Star Wars fun and more of a darker sci-fi film that came out the same year: Ridley’s Scott’s Alien.

Like Alien, The Black Hole is essentially a haunted house movie in space. The film opens with foreboding music and slow-burning visuals, including spaceships which are more like menacing shadowy hulks than the swooping toys seen in Star Wars. Even the good guys’ ship is introduced by slowly looming from the abyss, creepily blotting out the stars and filling the screen with blackness. It’s like the opening shot of Star Wars in negative.

When their ship encounters the titular rip in space, the crew spend several moments discussing its terrifying power. One intones that the cosmic phenomenon is “straight out of Dante’s Inferno”. And that’s just for starters: our heroes are soon creeping around an eerily abandoned ship — stunningly realised with some fantastic production design, incredible lighting and still impressive effects — before facing a madman who lords over an army of menacing robots.

I’m not exaggerating, by the way: The Black Hole was actually Disney’s attempt to make films for an older audience. It was the studio’s first PG-rated flick, in fact. And one of the best bits is a frenzied death scene involving Anthony Perkins, famous for his appearance in Alfred Hitchcock’s Psycho, and I will happily argue this shocking moment is up there with Hitchcock’s infamous shower scene.

Obviously The Black Hole isn’t Alien, or Event Horizon. But it definitely ain’t The Cat From Outer Space.

Sure, it’s kinda talky. The cast is amazing — Perkins, Ernest Borgnine, Yvette Mimeux and stoic Robert Forster years before Quentin Tarantino revived his career in Jackie Brown — but they’re mostly on cruise control. Film critic Gene Siskel wrote, “If actors get paid to express emotions, then the cast in The Black Hole doesn’t even deserve the minimum wage.” Ouch!

Maximilian Schell, however, is mesmeric as zealous scientist Dr Reinhardt, eyes burning with the warped vision of a man who has gazed into the abyss and mistaken it for a mirror. Reinhardt is a wickedly watchable villain, like a cross between Captain Nemo, Dr. Moreau, Prospero and Colonel Kurtz. And he’s locked in a delicious power struggle with one of the all-time great movie henchmen, the looming, blood-red killer android Maximilian. This silent cyclops, with his baleful glowing eye and mercilessly spinning claws, is the stuff of nightmares.

Admittedly, The Black Hole’s 70s silliness doesn’t help the suspense. Goofy stuff ranges from Borgnine’s chunky brown space-sweater to Mimeux’s character having telepathic powers for some reason. Quippy and cartoonish robots V.I.N.CENT and Old B.O.B are comically voiced by Roddy McDowell and Slim Pickens, facing a showboating gunslinger droid named Captain S.T.A.R who feels like he was added by a marketing guy from Disney’s toy division (the inevitable line of toys, like the film, were a bit of a flop). But you just have to try and enjoy these bits as retro kitsch.

And it’s worth the effort, because the silly stuff also heightens the contrast with an ending that is utterly, utterly bananas. After that shocking death scene, the whole thing bursts into stirring laser battles and entertaining disaster movie carnage, with the cast running for their lives from an enormous molten meteorite and battling the howling winds of a depressurising ship. Then it builds to a psychedelic climax that’s like a cut-price version of the ending of 2001: A Space Odyssey. And then, just when you thought it couldn’t get any weirder, the film hellishly crescendoes with a disturbing and truly surreal kaleidoscope of final images.

The cast weren’t told how the film was going to end, although it probably wouldn’t have helped them even if they had been. Maybe it’s meant to be allegorical. Who knows? All I know is that it creeped me out when I was a kid and it still creeps me out now. And it’s all the more chilling for appearing in a Disney movie.

Astrophysicist Neil deGrasse Tyson exasperatedly denounced The Black Hole as the least scientifically accurate movie of all time, saying, “They not only got none of the physics right about falling into a black hole, had they gotten it right it would have been a vastly more interesting movie.” With respect to Tyson, he may know stars and stuff, but he’s dead wrong when it comes to weird-ass 70s sci-fi flicks. The Black Hole is an oddball experiment and a cosmic anomaly in the Disney constellation. But most of all it’s an unnerving space/horror/disaster romp with a haunting ending that’ll pull you in.