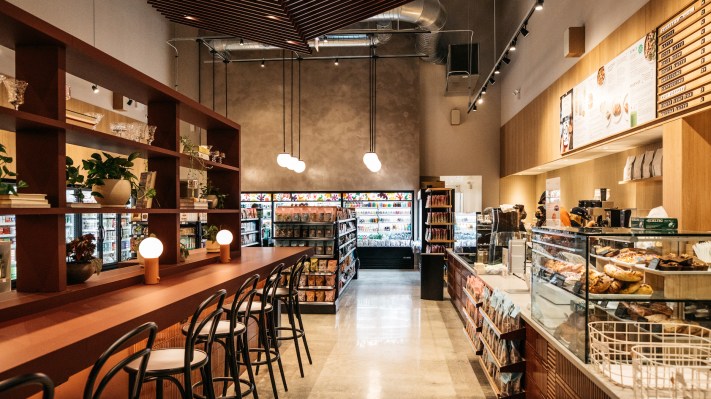 Foxtrot is changing the way we think about convenience stores, and just picked up $100 million in new Series C funding to expand its brick-and-mortar footprint to 50 new retail locations in the next two years.

We last looked in on Chicago-based Foxtrot in early 2020, just before the world was shook by the global pandemic. It had secured $17 million in a growth round and was offering customers the option to buy in-store or order online for delivery and had retail stores in Dallas and Chicago.

The company, founded by Mike LaVitola and Taylor Bloom in 2014, is reimagining the corner convenience store. Its origins are as a digital-first commerce platform, but went on to add a retail experience. It is now seeking the best food items by local artisans in addition to Foxtrot’s core offerings of coffee, ready-to-eat cafe meals and wine.

After the previous round, Foxtrot added Washington, D.C. to its market list and has since opened 16 retail locations across those three cities. Its offerings include five-minute pickup, rapid and on-demand delivery and its Foxtrot Anywhere nationwide shipping tool.

As we saw with the pandemic, most sales shifted online; however, LaVitola noticed that traffic into Foxtrot’s retail locations went up, noting that it was a less intense way of discovering a new snack food and “became a 20-minute joy in people’s routines” versus going into a restaurant or grocery store.

The company doubled its business last year, and the adoption of the retail store is also one of the drivers for the company to use the new funds to open 25 new stores in 2022. New locations will include Boston’s Back Bay neighborhood, the debut of two stores in Austin and additional Chicago openings — Willis Tower, Tribune Tower and near Wrigley Field. In 2023, Foxtrot will take that farther into new markets, like New York, Nashville and Miami, while also expanding its footprint across current cities.

“The biggest trend we have seen is customers fully leaning into the retail experience and for that to be the main customer acquisition point for the online business,” LaVitola said. “Delivery is here to stay, but customers are ultimately seeing the value of our merchandise. As a result, we are spending 90% of our time on that in-person experience, obsessing over who has the best donuts, coffee or tortillas.”

In addition to the retail locations, Foxtrot is investing the new capital into scaling its merchandising model, hiring additional engineering talent with plans to triple the team’s size in the next year. LaVitola also expects to hire in logistics, store payments, inventory management, personalization and Perks, Foxtrot’s loyalty program.

Perks itself has grown more than 110% in 2021, while its five-minute market pickup and cafe orders grew 250% and 375%, respectively, in the same time period.

Jared Stein, co-founder of Monogram Capital and a Foxtrot board member, called Foxtrot a “category killing model” in the way it’s been able to dominate as an omnichannel brand and local product curator.

“Foxtrot, in our minds, is rare,” he added. “They built their tech stack from the ground up, and it is hard to find another company with the same level of curation and local partnership with interesting brands. That is a reason for people to come into the story. Others are doing this, but with complications. Foxtrot worked on that before scaling it out.”

Editor’s note, Jan. 11, 6:29 a.m. PT: The company amended its list of investors to include M3 Ventures’ brand change to Beliade.